After that amazing museum, we took the subway clear across town to Vysehrad, the old fortress on the south side of Prague.  It probably dates back to the 10th century, but apparently nobody is sure.  We walked around in the fortress looking at things, and eventually ended up at the Basilica of St. Peter and St. Paul, which I had seen from the outside in the summer but had not been able to enter (I got there rather late in the day): 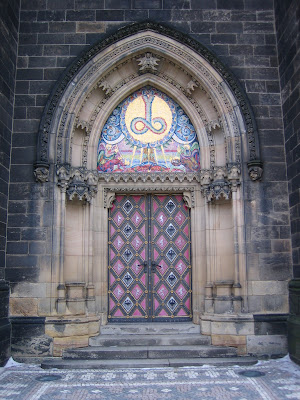 That's one of its doors (go back to my summer photos for a picture of the whole thing).  This might give a hint of the whimsical, modernist style of the interior, but only a hint.  It was really amazing; I've never seen a cathedral like it.  Sadly it was too dark inside for photography, but the whole interior was done in an Art Deco style (in the 1930s, perhaps?) by famous Czech artists of the era.  I wish I could show it to you.

Beside the Basilica is the Vysehrad cemetery, a rather nifty cemetery: 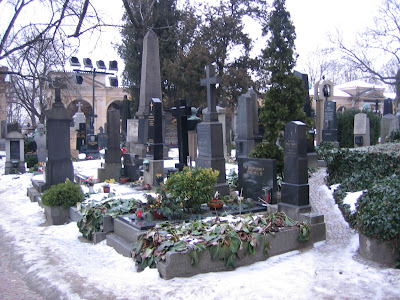 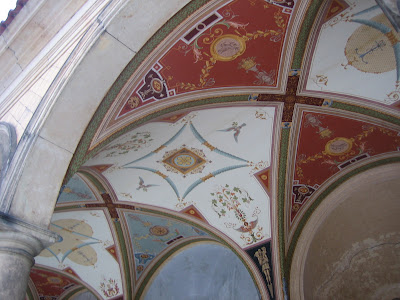 I stumbled upon the grave of Karel Capek completely by chance: 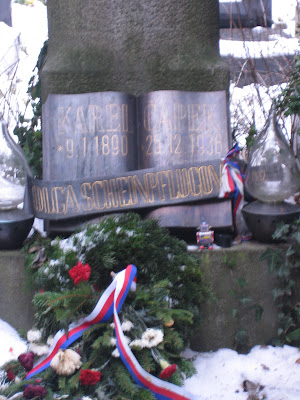 Yep, that's a little toy robot next to the tombstone.  (Capek coined the word "robot", back in the early 20th century.)  Upon seeing that, we did a little research and also found the tomb of Dvorak: 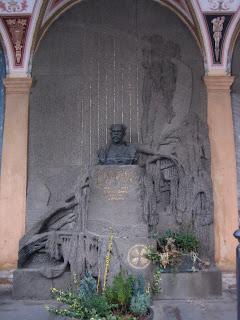 That was particularly special because we were going to a concert that evening with music by Dvorak, in Prague's Dvorak Hall, in the Rudolfinum.  We also heard a piece by Sibelius.  Here's what I wrote at the time, on Facebook: "I don't know much of classical music this modern, so all the music was new to me, but I liked both, particularly the Sibelius piece (Concerto for violin and orchestra in D minor, Op. 47). It featured a solo violinist, Nikolaj Znaider, who was really quite spectacular. The Dvorak (Symphony No. 7 in D minor, Op. 70) was quite nice too, very dramatic with lots of action in the cello section."

But before going to the concert, we needed dinner, so we went to Pivovarsky Dum, a place somewhat near the Vysehrad (well, towards the south, anyhow) with great beer (didn't see that coming, did you)?  They had a tasting selection of perhaps eight different beers, some traditional, some with very unusual flavors like nettle (this one was green), sour cherry, and coffee (both of those last two were quite tasty).  They also had a "classic old Bohemian mead" that was just wonderful; we bought a bottle of that from the bartender for a ridiculously low price, and it is now back in Montreal.  The service was ludicrously slow; it seemed like there was one waitress for two large rooms, and we waited nearly an hour to even order our drinks.  We made it to Dvorak Hall just in time, after rushing along on ice-covered streets (it had been putting down layers of frozen rain while we were having dinner).  I slipped on the ice and bruised up my knee pretty good, but the music was so enjoyable I hardly even noticed.

And that was our last day in Prague; the next morning we just muddled around a bit near our hotel, and then got to the train statin and came back to Vienna.
Posted by Ben Haller at 11:03 AM