New Year's Eve in Vienna!  We went to a restaurant on a hill overlooking Vienna, Kahlenberg, and had dinner at a restaurant at the top of it, also called Kahlenberg: 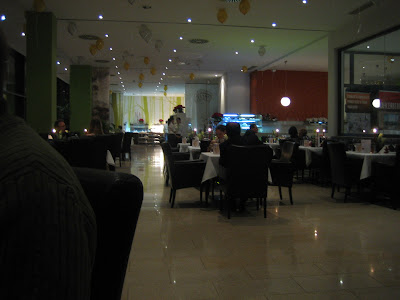 It was basically a fancy buffet dinner.  The view out over the city was quite nice, with fireworks going off in all corners, but that proved impossible to photograph.  There were also people setting off all sorts of fireworks from the balcony just outside the restaurant: 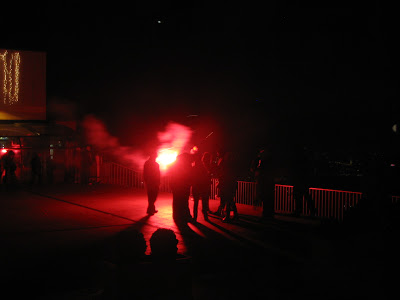 It was quite fun, but I was fairly sick, and so we called it quits before midnight and went back to the apartment for me to collapse.  On the way back, a serendipitous moment: 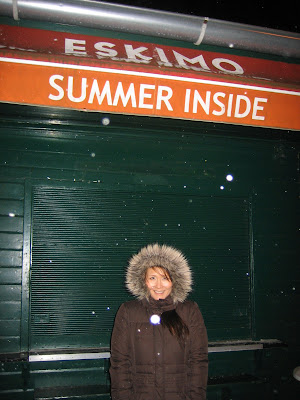 We always joke about how Keewi looks like an Eskimo (I guess the correct term nowadays is "Inuit"?) when she wears that coat.  When we got back to the apartment, it turned out that we had ringside seats for the mayhem that is Vienna on New Year's Eve: 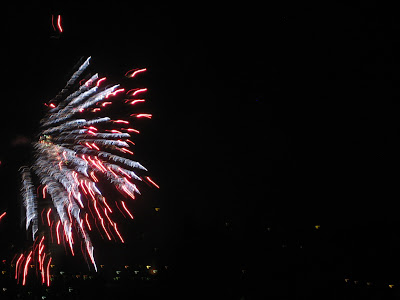 That's the only photo that came out at all, but we could see (from our fourth-floor window) fireworks being set off simply everywhere, including by two different, and apparently competing, groups of partiers on the street directly below.  The fireworks people set off in the streets here are not the familiar bottle rockets, sparklers, etc. that Americans would have; they are top-quality, the kind of fireworks that you see in the U.S. in the big fireworks shows that cities do.  Ordinary people have those here.  Fireworks are apparently entirely legal here, and frankly it's amazing the city doesn't burn to the ground. Bangs and whizzes and wails, and ambulances and fire trucks roaring around the city with sirens blaring, until about 2 AM, when it finally died down.  Wow!  Honestly, I didn't know Austrians had it in them, they seem so reserved ordinarily!
Posted by Ben Haller at 7:12 AM