So last Sunday, Sept. 5th, I took the train from Vienna to Zurich.  It was quite a nice train ride actually.  It took about eight hours.  I went first class because it only cost a little more and, well, eight hours.  I spent the whole eight hours reading papers in preparation for meeting with a professor in Zurich.  It turns out that being on a train is a perfect environment for getting reading done: nowhere else to go, nothing else to do, and few distractions except for the occasional beautiful view.  The views started out as rolling countryside similar to that I've been seeing in Austria for months now: 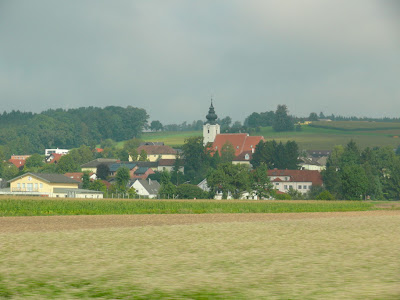 But as time went by, it got more mountainous: 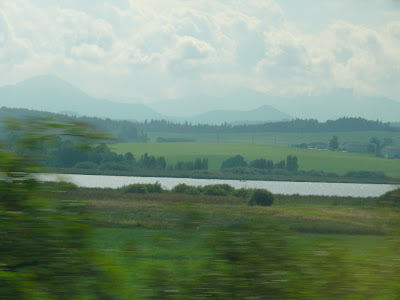 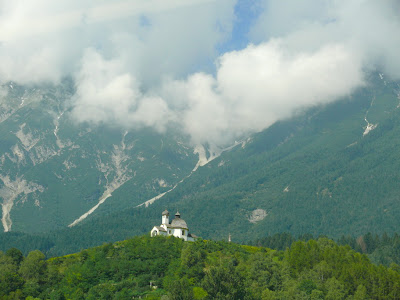 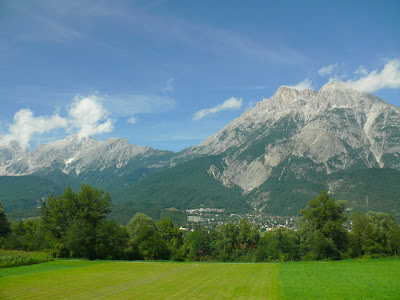 The route to Zurich runs out the panhandle of Austria (I wonder what they call it?  but Austria is shaped like Oklahoma, so it's a panhandle :->), through Innsbruck and Bludenz, so we were in a flat valley with towering mountains on both sides.  Lots of tunnels.  The train kept up a decent clip, often hitting 200 kph (about 120 mph), although usually going a bit slower than that.  Soon enough, we were alongside the Zurichsee: 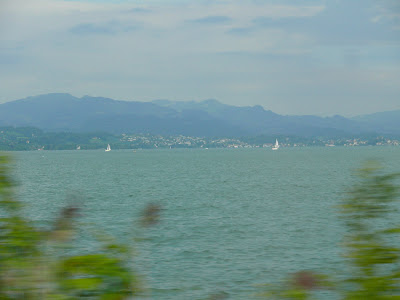 The sailboats on it were nice, and the mountains around, but it was a bit too overdeveloped to be really scenic most of the time.  In a couple of minutes we arrived in Zurich.  I took some photos that evening, on my way to dinner after I found my hotel: 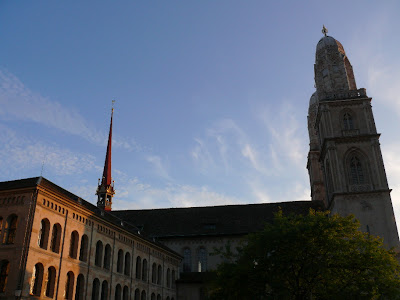 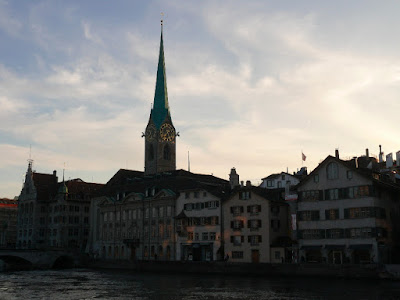 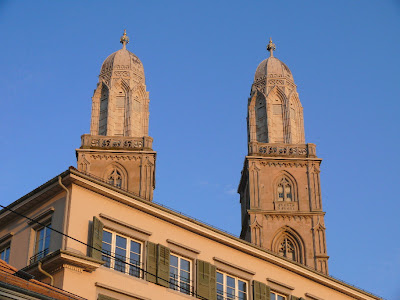 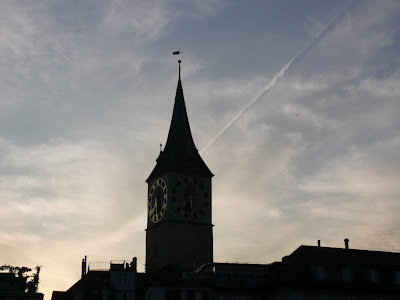 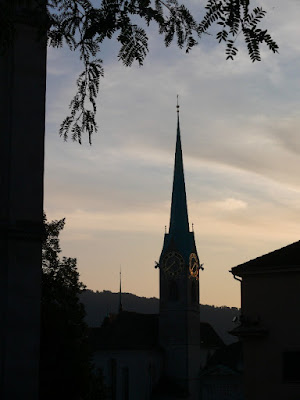 That's all my photos from Zurich, though; I was working pretty hard while I was there, and I didn't get the chance to explore much.  It seemed like a nice enough city, from what I saw, if rather too oriented in the direction of upscale shopping.  One night I had surprisingly spicy Indian food (Goa fish curry) at a local restaurant (Khan's); it was hotter than you would usually get even in California, and it wasn't the hottest dish on the menu either.  Nice.  The other two nights I had dinner with the folks I was working with, at two different restaurants.  Pasta with salmon and an alfredo-type sauce one night, in a wonderfully quiet restaurant.  I actually really like when restaurants don't have music on; it makes conversation so much easier not having to talk above the music.  The other night I had a fairly traditional Swiss dish, a big slab of pan-fried potato shavings (like hash browns) with tomato and cheese on top, customized by the addition of a sausage.

A digression: just as in Austria, customizing a menu item was an uphill battle.  I had a German speaker sitting next to me (an Austrian, actually) who facilitated, and even then it took much negotiation.  Finally the waiter agreed to do it, if and only if he was allowed to bring the sausage by itself on a separate plate; he was not comfortable putting it on the same plate as the main dish.  When my food arrived, I hoisted the sausage on my fork, stacked the plates, and deposited the sausage on top of the other food; the waiter backed away from the table with a shocked expression on his face.  This reminded me of the time I was at a cafe in Vienna with some friends; the cafe had a cheese omelette on its menu, and a ham omelette, and a tomato omelette.  I asked the waiter if I could have a cheese, ham and tomato omelette.  He took the menu from me and looked at it with furrowed brows for a good fifteen seconds, then handed it back to me and explained sadly (in very broken English) that he didn't think that was on the menu.  I don't think he was being sarcastic; I think the idea that a special order might be assembled upon request was simply outside his range of possibility.  I tried a few lines of attack ("Yes, but could you make one anyway?") and was just met with puzzled looks and more sorrowful declarations that the dish I wanted simply did not exist.  The concept of a special order proved impossible to convey given the language barrier, and so I had a cheese omelette.

The folks I was working with in Zurich are at the Institute for Systematic Botany, a part of the University of Zurich.  It's located inside the University of Zurich's botanical garden.  I didn't have time to look around for more than a couple of minutes, but it sure seemed like a beautiful place to work.  I had a conversation with them about how important it is to work in a beautiful environment, how much happier and more productive it makes people.  This is something that often seems neglected nowadays, although in Montreal I am lucky enough to work in the Redpath Museum at McGill, which is wonderful in a somewhat more whale-skeleton-y, stuffed-bird-y kind of way.  :->

OK, one more observation and then I'll let you go.  In German, the word for "emergency" seems to be "not," so you see things labeled as emergency exits and such with the prefix "not".  I find this endlessly amusing.  For instance, I'll be on an elevator, and there will be an emergency telephone labeled "NOTTELEFON," and I'll have a little conversation in my head about what a shame it is that it isn't a telephone, because in an emergency it would be really convenient to have a telephone in the elevator, and what a cruel joke it is to put a fake telephone in an elevator, and...

Sigh.  OK, I'm probably the only person in the world who thinks that's funny.
Posted by Ben Haller at 11:47 PM