So here we are in Melk, on the walking tour.  It starts at the old city wall: 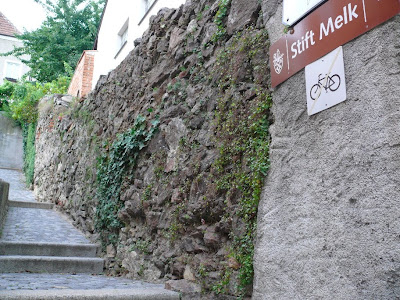 To put "old" in perspective, the first written mention of the town of Melk dates back to the year 831.  I don't know how old the city wall is; I wonder if anybody knows.  Along the wall is the path up the hill to the monastery, but I didn't do that until the next morning.  Nearby, a house with painted shutters dates to 1657: 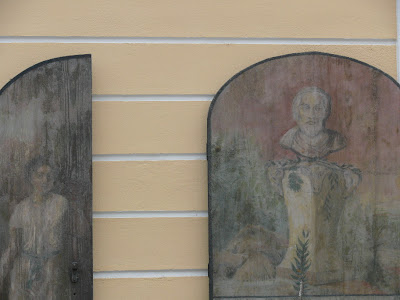 This is not the oldest building in Melk, however; more on that below.  Next door is Melk's town hall: 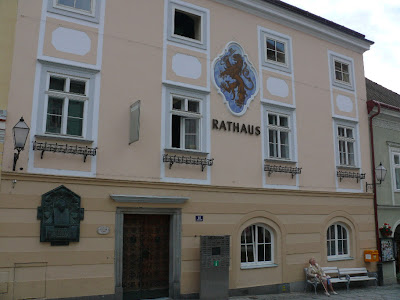 Here's a view of the main street from in front of the town hall: 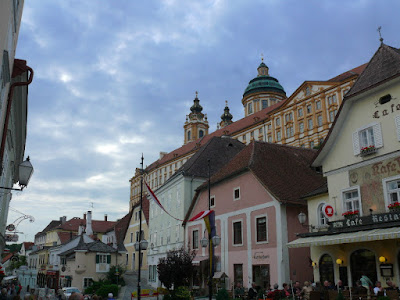 Yep, another tourist trap.  I mostly avoided this main street, apart from the city tour; it was a bit too much for me, and other parts of town were less kitschy.  Anyhow, next was a building that the walking tour described as an example of "medieval profane architecture."  I don't know what that means. 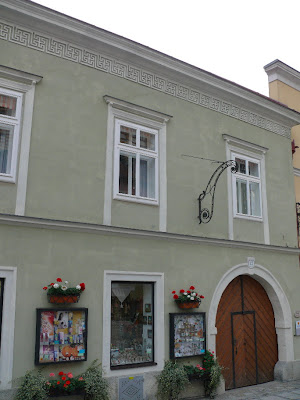 OK, maybe I'm putting my audience to sleep.  Here's a building I liked with frescoes on the walls: 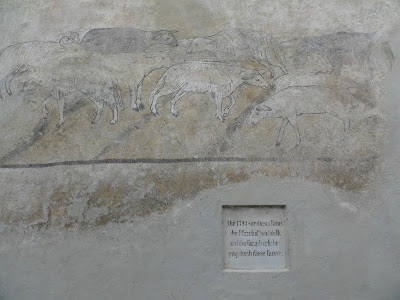 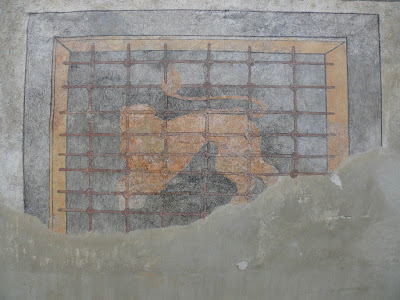 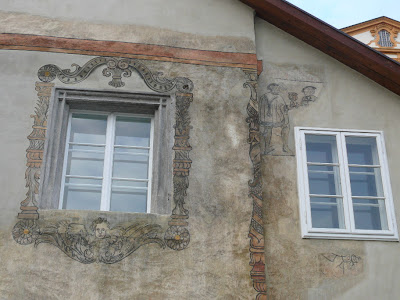 Also an old building, but not the oldest in Melk; the date 1390 in the inscription refers to the street, not the building.  No; here is the oldest building in Melk: 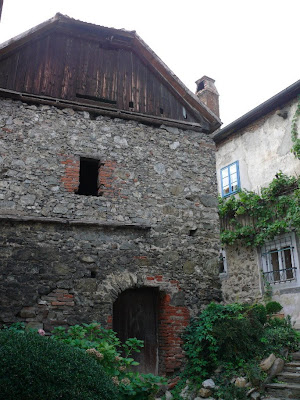 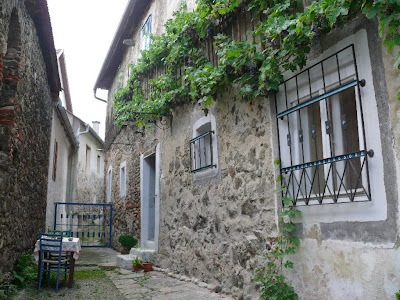 This is the Haus am Stein, built in the early 1500s (it seems not to be known exactly what year).  The grapevine running along the front of the house is all one vine, and it runs back well beyond the camera's vantage point.  Definitely the biggest grapevine I've ever seen, by a long shot.  It seemed quite healthy despite its age: 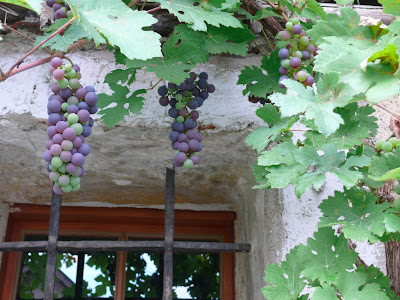 I don't know if this makes me a bad person or not (the grapevine is actually protected by law), but I ate a grape off of it.  OK, I ate two grapes off of it.  And they were quite tasty.  I don't know the varietal, sorry.  :->

Here's a half-tower that was part of the city wall: 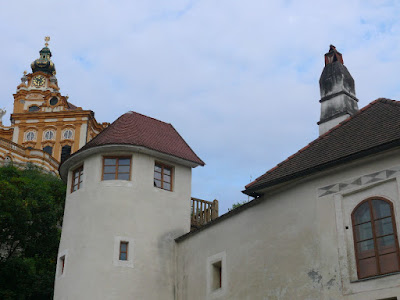 And now we reach the Salzhof, the Saline Offices: 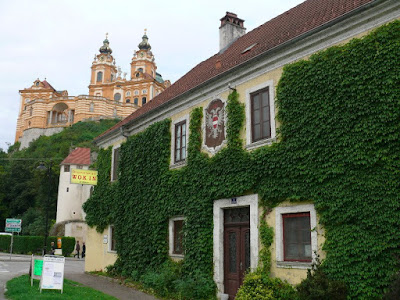 Remember that we are not so very far from Salzburg here, and salt mining was big business for many centuries in this area, so the Salzhof would have been an important commerce center for the town.  It is now China Restaurant Wok In.  Times have changed.

On to the Shipping Master's House, the Schiffsmeisterhaus: 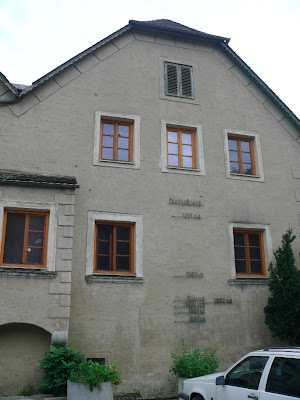 Like the Salfhof, this faces directly onto the Danube, and it's interesting to look more closely at its front: 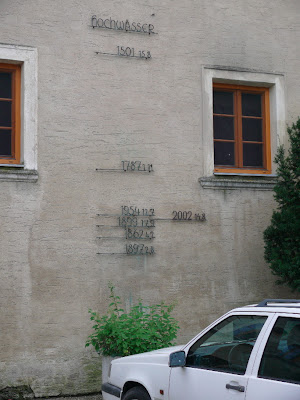 Those are the dates and levels of the floods of the Danube over the past couple of centuries.  The Danube was, I would say, easily fifteen feet below the base of the foundation when I was there, so these are some very high floods, 2002 being the most recent!

Here's a watch tower in the city wall: 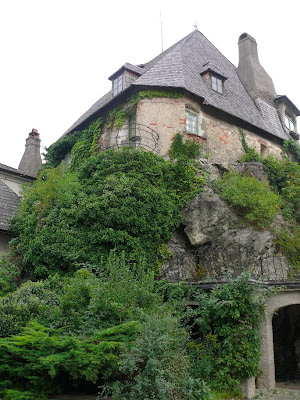 And here's a defensive tower: 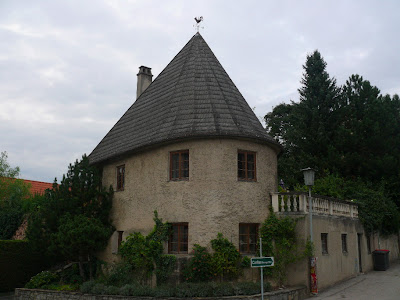 Pause for a particularly nice view of the monastery: 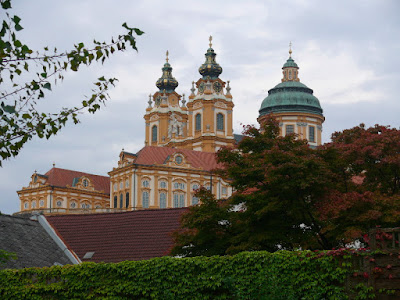 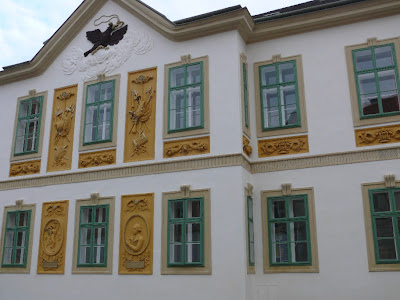 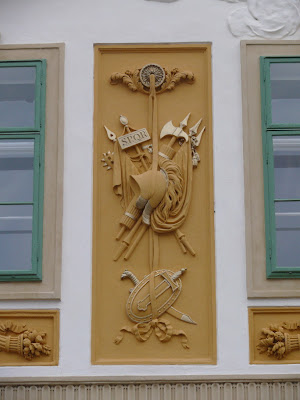 SPQR??  For those who didn't grow up on Asterix comics, SPQR is an abbreviation for an old Roman Empire slogan.  No idea what it's doing on the post office in Melk.  Anyhow, next on our tour is a statue of St. Nepomuk in a central square of the town: 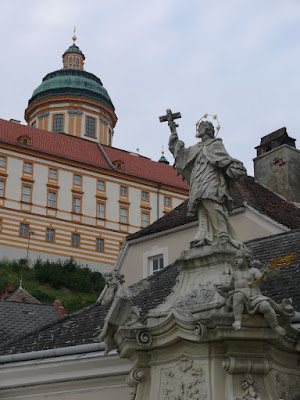 I didn't get this until putting this blog entry together, but according to Wikipedia, St. Nepomuk is a protector against floods.  Now it all makes sense.  He's holding his crucifix up to ward off the high waters.

Finally, here's the Gothic Pfarrkirche, or parish church, of Melk: 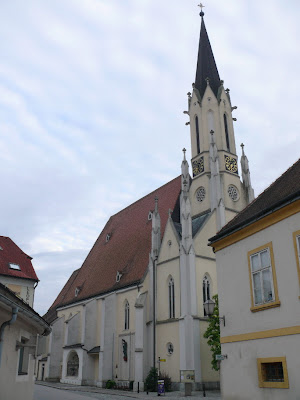 This, conveniently enough, is mere steps from where I had dinner at a very yummy restaurant called Tom's Cafe.  Despite the name (I think they're trying not to scare off the tourists), this is a place that is serious about its food (click to see the menu pages big): 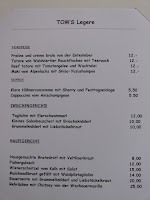 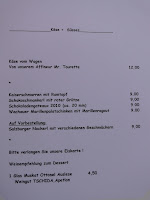 Restaurants in Austria (and, I've found, the surrounding countries) often have just a single beer available, but that single beer is always on tap.  As a friend explained, all the beers produced locally are good, so why offer more than one?  The beer at Tom's is Reininghaus, which I hadn't seen before: 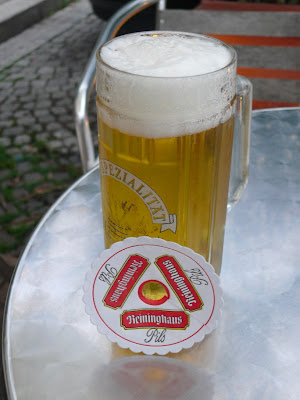 I started off with a surprise appetizer that was on the house: 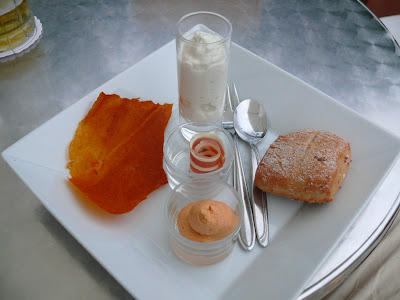 That's a cup of something similar to cottage cheese, a thin curl of bacon, a sheet of some crackly substance (I no longer recall what it was, sorry), a bit of bread, and a buttery spread.  All quite tasty, and the flavors complemented each other very pleasingly.  Next was the "Maki vom Alpenlachs" appetizer: 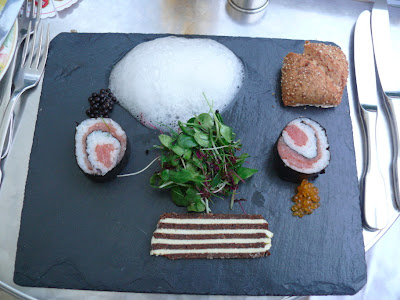 These were two pieces of sushi made from local fish, with heaps of two different kinds of roe, plus a "Shiso-Yuzushampoo" which turned out to be an intensely lemon flavored foam.  The stripey thing is pumpernickel bread somehow layered together with stripes of butter.  The salad in the middle was doused in vinegar.  The flavors of the vinegar, lemon, roe, fish, and bread melded perfectly.  The chef at this place really knows what he's doing.  Next up is the "Cappucino vom Anischampignon": 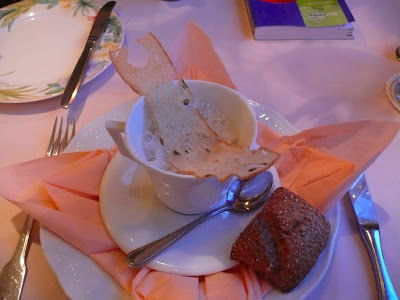 Upscale cream of mushroom soup.  The "cappucino" part is that the soup was frothed into a foam, with only a bit of liquid at the bottom.  It was so rich that that treatment seemed appropriate, though; it didn't seem gratuitous to me.  Or maybe I'm just rationalizing.  :->  This is the first time I've been to a restaurant that really went in for this super-modern "foam" food concept, though, and I was pleasantly surprised to find that it worked for me.  Still, I might have preferred to have a bowl of normal yummy cream of mushroom soup.  Finally, I finished with the venison (the Rehrücken); apologies for forgetting to photograph the plate before I had taken a bite: 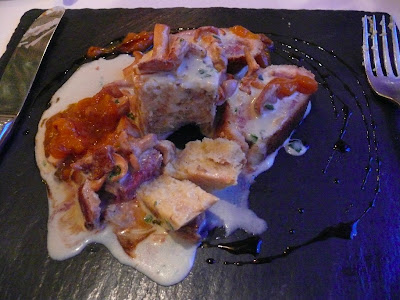 This was very good, but not stunning.  I knew it was high risk going for a dish with apricots in it, as I rarely like sweet flavors in mains, but the waitress urged it upon me so strongly that I decided to trust her.  Were my tastes not biased against it, I might have liked it better, but I should have ordered something else.  The meat was excellent, but the sauce just didn't work for me.

Now I staggered back to my hotel and rolled into the sauna.  Yep.  The hotel had a sauna.  It wasn't large, and I was the only one using it, but that suited me fine, since it meant I could put a ton of water onto the rocks and turn it into a steam bath, which is how I like it (breathing hot dry air is unpleasantly drying to one's lungs, I find; makes me cough).  Once I was driven out of my steam bath by the limits of my endurance, I went to bed warm and full and tired and happy.  The Wachau gets two thumbs up from me.
Posted by Ben Haller at 12:14 PM