Abisko is famous for its displays of the aurora borealis; the Abisko tourism website says it's the "best place on earth" to see it.  The aurora borealis is most visible from 60° to 72° north; Abisko is at 68°N, just north of the Arctic circle. Abisko is also supposed to have "fresh, clear air" and a "practically permanently cloud-free sky"; never mind that while I've been here it has been cloudy more often than not. The aurora also occurs most often close to the equinoxes (I have no idea why), and of course the spring equinox is ten days from now. And then on top of all this, there has been good solar activity in the last few days, and the aurora is driven by solar activity (see the Wikipedia page if you want to read about that, I'm not going to get into it).

We've seen the aurora well twice so far.  Tuesday night was absolutely stunning.  It was the first time I've ever seen it, so that was a nice way to start.  It was quite bright, but whiter than I expected.  It turns out that it photographs as green, but to the naked eye it appears rather whiter (although still somewhat green; just not nearly as green as the photos make it look).  This may be a matter of human night vision, actually; it presumably really is green, but night vision uses the rods in your retina, which don't see color (cones are for color), so I guess that makes the color be washed out compared to what the camera sees.  Perhaps when it is exceptionally bright, it looks greener; I gather it can sometimes be bright enough to read by.  Anyway, it also moved and changed much faster than I expected; it would flutter and wave and brighten and darken second by second, sometimes, which was really lovely to behold.  At its peak that night, it stretched from one horizon to the other in a continuous curtain that was shifting and waving across the sky, with other detached portions elsewhere in the sky.

That Tuesday night we got lucky with a break in the clouds; it cleared up for about an hour, and the aurora was amazing, and then the clouds came back and stayed for the next day and a half.  Then today it got clear again, and this evening the aurora came back for a brief appearance.  On Tuesday I didn't attempt to photograph it, partly because I just wanted to watch it, and partly because I didn't have a tripod.  But tonight I propped the camera on a railing on a dock at the lake down the hill from the research station, and took a bunch of photos, one of which came out: 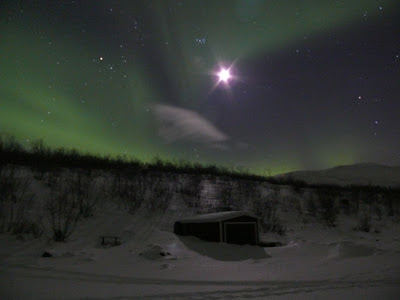 Tonight's aurora wasn't nearly as bright as Tuesday, and didn't move nearly as quickly.  Still it was nice; and there were some patches that were red, although I didn't photograph them.

So now I have seen the aurora borealis, and I can die happy.  It's one of the more beautiful things I've ever seen.
Posted by Ben Haller at 2:24 PM