So, here I am in Abisko!  I'm attending a week-long workshop (well, officially a "school" but I find that term strange) on ecology and speciation.  It's going quite nicely so far; very interesting lectures, and starting this evening we will have some seminar-style discussions, too. Lots of modeling and equations, lots of fascinating concepts. But that's not what I'm going to write about right now; maybe later.  For now, I just want to show you photos of the place.

So the school is at a small research station outside the actual town of Abisko. Here are some photos from my first day here, when it was gray and snowy: 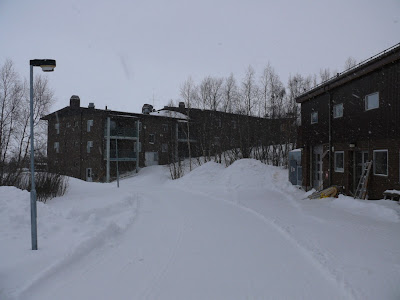 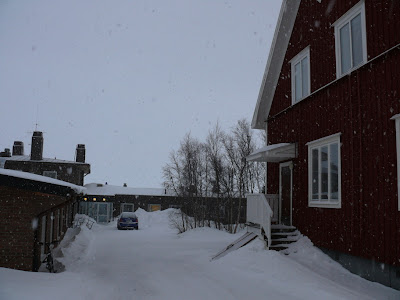 Happily, it has not stayed like that the whole time (just most of the time).  This morning it was relatively clear; still a high gray cloud layer, but pretty good views nevertheless.  I climbed a small meteorological tower here and got a few photos of the surroundings: 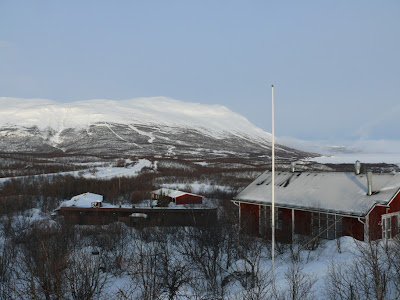 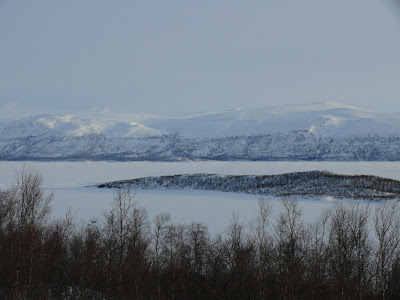 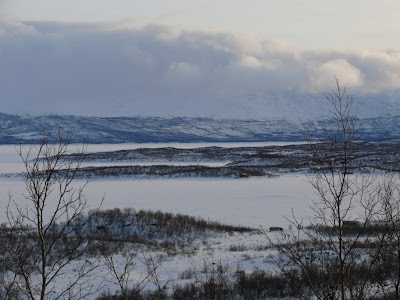 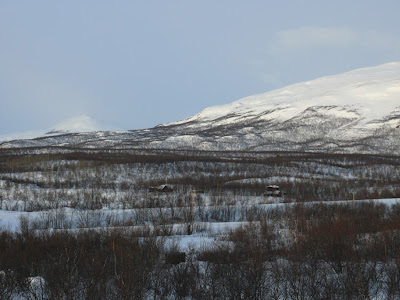 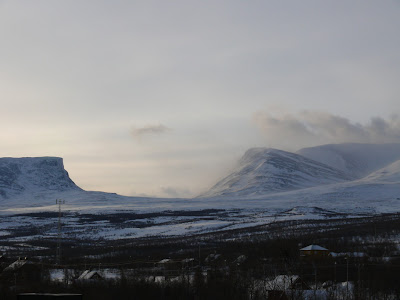 As you can see, Abisko is pretty well surrounded by mountains. The last photo shows a famous local landmark, the "Gateway to Lapland", the gap in the mountain range there.

We had a presentation yesterday by one of the folks who lives at the station and does research here.  Here are some notes I took from his talk, giving some context on Abisko and the research station:


Abisko exists because of Kiruna, and Kiruna exists because of iron mining.  [If I recall what our bus driver up here told us, Kiruna has the largest iron mine in the world. He said that with recently rising metal prices, Kiruna was experiencing a huge boom, and housing prices had gone through the roof, such that he, a waste-processing engineer, had to work nights as a bus driver just to pay his rent.]

The research station was constructed in 1912; research began in the area earlier, in 1902. It once focused on research into the natural environment of the Abisko area; now it is more outward-looking and hosts many foreign scientists and workshops. Abisko is in a rain shadow due to the mountains to the west, and receives very little precipitation. This means the area compresses what are normally long latitudinal gradients, making them easier to explore in the field. It is not a natural landscape; reindeer herding by the Sami people has grazed down the landscape for at least 400 years. There are six field cabins around Abisko Station (some with their own saunas!). Several thousand scientific publications have come out of the Abisko field station.

Some of the fields of research pursued here:

Geoscience research: glaciers and inland ice. A focus on landscape-forming processes at different timescales and under different climatic conditions.

Experimental ecology: creation of chambers with altered temperature, CO2, and UV-B radiation, and experiments to see the effects of this on vegetation, ecological processes, and biodiversity.

Integrated activities: monitoring, manipulation, modeling. This kind of interaction between empirical research and modeling creates a positive feedback loop of science: predicting and measuring feeding back on each other.

He finished up by talking about climate change.  What is happening to the environment in the north of Sweden? There has been an increase in temperature over the last 15-20 years, and the permafrost is starting to melt at low altitudes around Abisko. The landscape is slumping in some areas, and moving more than it used to. The prediction is for more snow, paradoxically, despite the rising temperatures, in this area. There are multiple changes such as warming and loss of cold winters. He estimates that 90-95% of the climate scientists he meets at Abisko are very concerned about these changes, and believe they are anthropogenic. One of the biggest consequences will be alterations to peat bogs, which will thaw and release methane. Many metrics of change have showed movement in recent years. Snow depth almost doubled in the past 90 years, hardness and wetness of the snow cover in increasing. [And his time ran out here and he stopped talking.]

So, that's Abisko!  Next up, aurora borealis.
Posted by Ben Haller at 6:44 AM