Lunch from the Farmer's Market

This Friday Laxenburg is taken over by a stage of an Austrian bike race; the end of the route is right in front of the schloss where I work.  I decided to come home early, figuring that it would be a mob scene, the traffic might mess up the bus schedule, and I need to get ready to go to Bratislava bright and early tomorrow morning.
But most Fridays, there is a Farmer's Market in Laxenburg, again literally outside the front door of the schloss where I work: 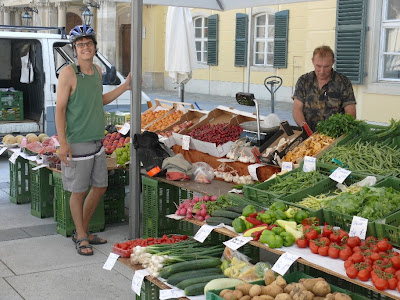 That's Stefan, another YSSPer, buying some absolutely divine peaches.  Last Friday (yes, I'm a week behind in my blogging :-<) I bought my lunch there and ate in the park behind the schloss.  It's a small affair; you can see the fruit and vegetable stand above.  There is also a bread stand and a cheese stand: 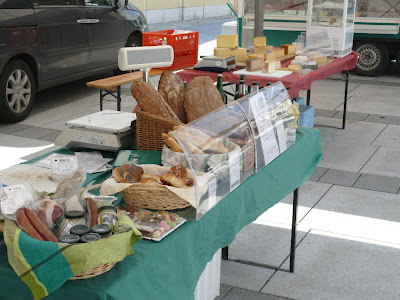 And a butcher (not shown).  I didn't walk far into the park, just past the fountain at the entrance: 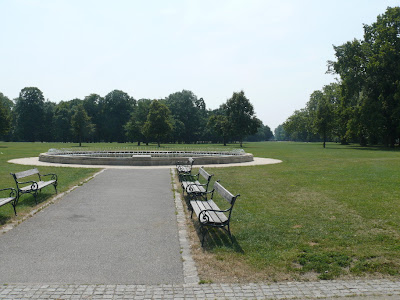 From my bench I had a nice view back at the schloss: 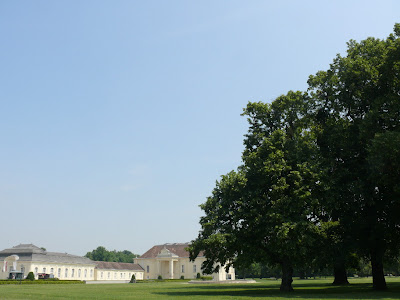 There's a little tourist train that chugs around the park: 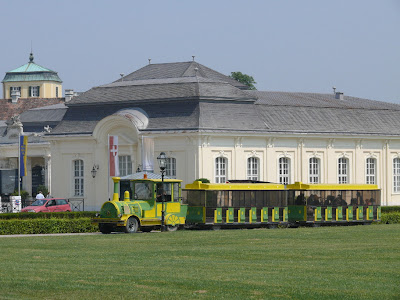 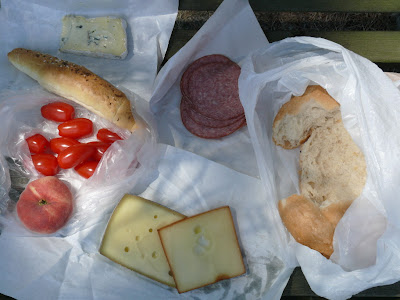 Stefan gave me one of his amazing peaches, as you can see.  A few kinds of cheese, some bread from the Turkish bakery in Simmering, some more bread from the market (a sort of mini-baguette with salt on it, goes very well with cheese), some salami-type meat, and some fresh-picked tomatoes.  Yum!

Just a peaceful moment I thought I'd share.
Posted by Ben Haller at 7:47 AM