Biking around the Alte Donau

Last Saturday I went on a test ride, to make sure my bicycle was up to snuff, to find the head of the bike trail to Bratislava, and just generally to explore and have fun.  I only started taking photos partway through, because initially I was preoccupied with route-finding.  It was a pretty ride, though.  Here are some sailboats on the Danube: 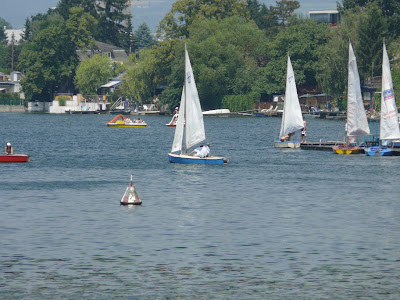 Note quite as idyllic as it looks, however, if you zoom out just a bit: 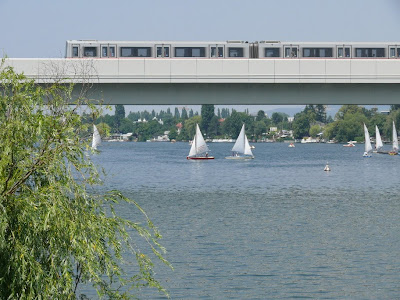 The Danube in Vienna is an urban river.  Another photo also illustrates this; this is looking across a touristy stretch of the river at Stephansdom in the distance: 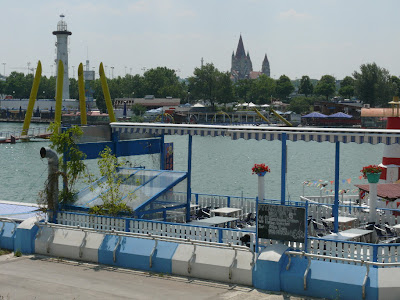 Alte Donau, by the way, is the old course of the Danube, a leisurely bend next to the straight, modern, man-made course of the Neue Donau.  There's a nice park in the Alte Donau area, aptly called Donaupark: 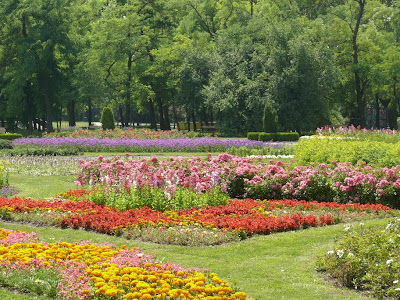 But again, we are not far from downtown: 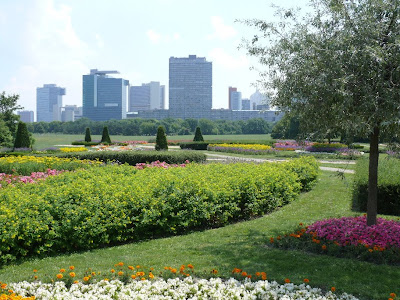 I don't point this out to be mean; of course the same is true of Golden Gate Park, or Central Park, or any other urban park.  I'm just trying to give a sense of the flavor of the Danube and Donaupark as being little oases inside Vienna.

The bike path outside Vienna city limits gets less urban; here are three photos showing how the path changes as you go from Vienna south: 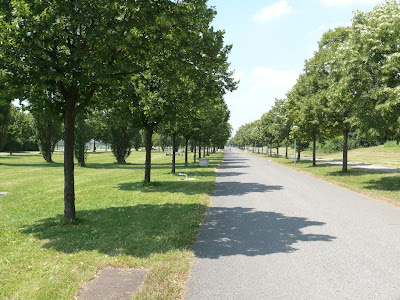 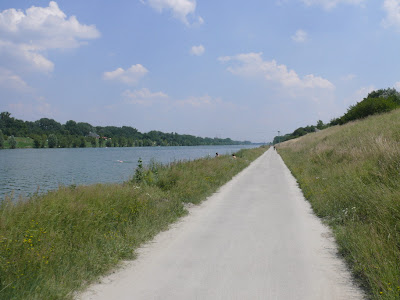 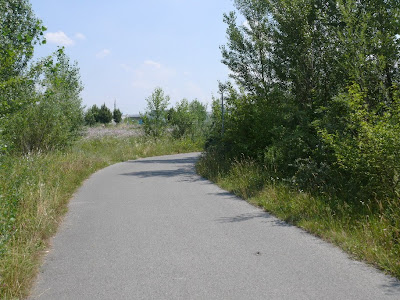 Getting nicer, eh?  I'm really looking forward to this Bratislava ride tomorrow; much of it goes through natural areas that are supposed to be very pretty.

By the way, I was somewhat restricted in my photography in these photos, because everywhere you look along this bank of the Danube are naked Austrians.  Not necessarily the sort of naked Austrians you really want to look at; and yet there they are.  Austrians pride themselves in being different from their German neighbors (they generally rooted for Spain against Germany in the recent World Cup match, for just one example), but in this respect, at least, their shared cultural heritage is clear.

I'm almost done with this tale, but here's a neat thing on the river: 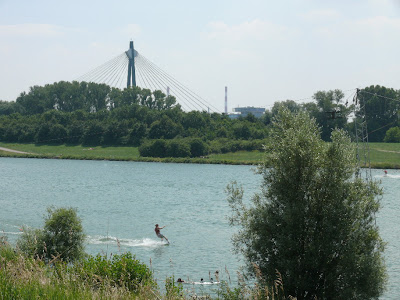 A bit hard to see what's going on there, perhaps, but there's a fellow waterskiing on the river, and he's being pulled by a cable attached to the tower you can see at right.  The cables go round and round on a series of such towers, and the waterskiiers can just get pulled along by them.  Maybe this is something everybody else has seen before, but it's new to me, and I thought it was pretty neat.

OK, riding home to Simmering now, which is not the most scenic ride.  Last time, I got a little bit lost, and rode right past the sewage treatment plant.  This time I was just treated to various industrial and chemical plants: 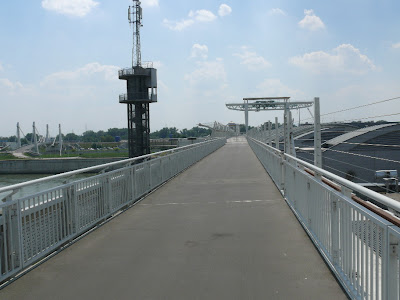 Well, I guess that photo just mostly shows the bridge, but trust me, the plants are there.

South Simmering has a huge cemetery, and every second storefront down there sells gravestones.  This one caught my eye: 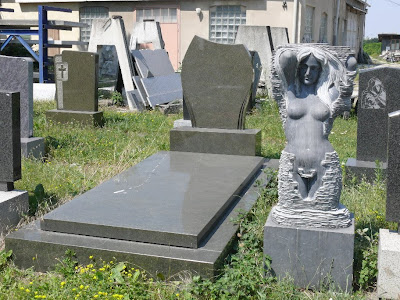 Who on earth would want their grave marked in such a manner?  Well, apparently there is a story to this.  A famous artist in Austria, a few decades ago, had a wife who predeceased him.  He made a gravestone for her that had a sculpted male figure with a very large and prominent, uh, member.  This caused a bit of a stir, but he got away with it because he was so famous, and apparently it started a trend. When he died, he ended up, as I understand it, with a gravestone with a female figure, as pictured above, and this fad of having lascivious gravestones continues on in Austria even now.  This is the tale my supervisor Rupert told me, anyhow, when I mentioned my puzzlement at this gravestone.

OK, probably not the most exciting post I've done in this blog, but hey, you learned a thing or two, didn't you?
Posted by Ben Haller at 8:23 AM