This is old news, but a couple of weeks ago we got a tour of the Laxenburg Schloss from Warren Sanderson, a research scholar at IIASA.  I've put of photos before of the areas that we normally got to work in; on this tour, we got to go into some areas that we are not normally privy to.  By the way, you can also check out the home page for the schloss online, although it is in German.

We started out at a public spot, though: the "orangerie."  This is the greenhouse where they used to grow oranges, so as to have them year-round.  It's now a plant nursery and gardening shop: 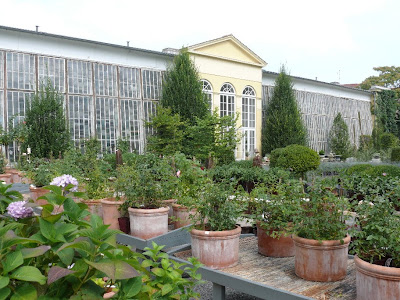 Rather huge, eh?  We didn't go inside; I'm not sure why not, in hindsight, I would have liked to see the interior.  Next stop was what used to be the stables, with room to put up all the horses of all the visiting nobility: 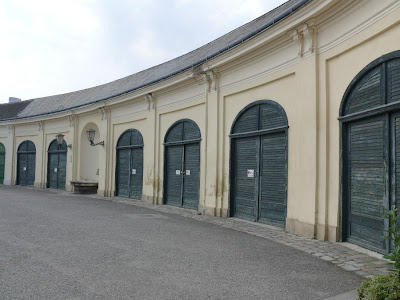 Again, didn't go inside.  Opposite the stables is a big part of the schloss that now is used as a conference/wedding center, the highlight of which is a wonderful ballroom: 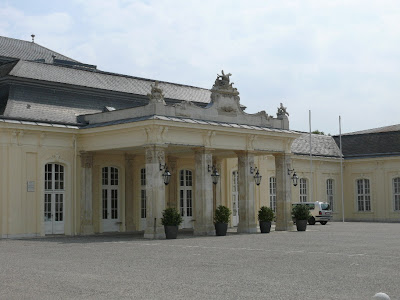 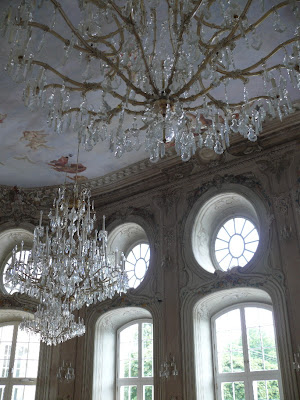 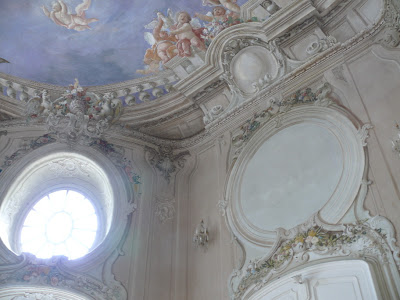 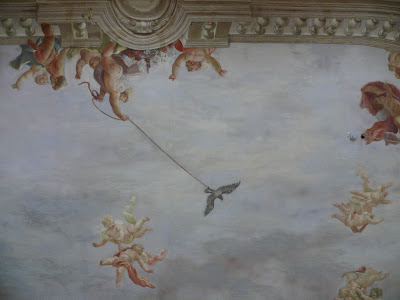 That ballroom is much bigger than my camera was able to capture, so you'll have to be content with those rather inadequate shots.  Then we went into the theater, which is an odd hybrid of old, restored designs and new, modern ones: 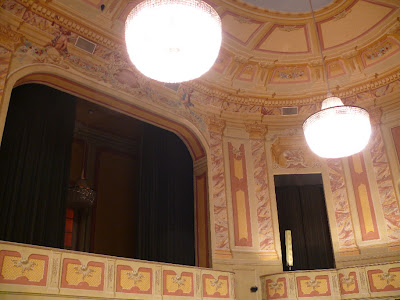 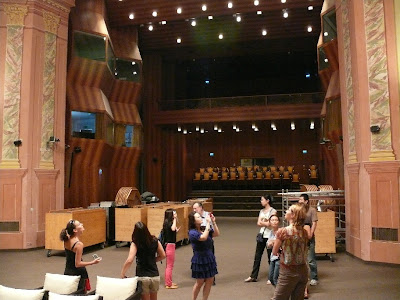 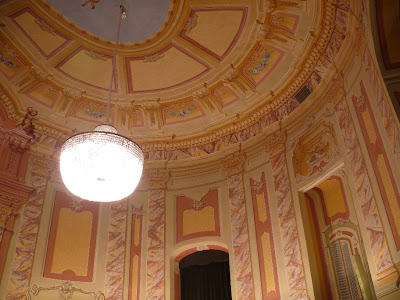 The romance of the surroundings was infectious; here's a silhouette of Hayley, a dancer in our group, doing a curtsey in an empty ballroom: 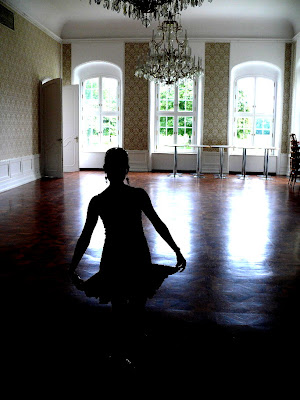 Back outside to the front entrance, which you've seen before, but here it is again, since it really is simply astounding that I've gotten to work in this building all summer: 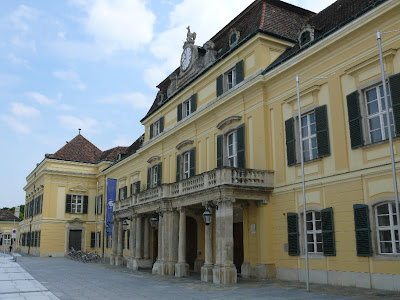 Here, as a mid-tour intermission, are some photos (of photos in the hallway at IIASA) of what the schloss looked like after the war (I say generically "the war" because I'm not sure if these are after WWI or WWII, sorry), before it was restored.  It was really a complete wreck: 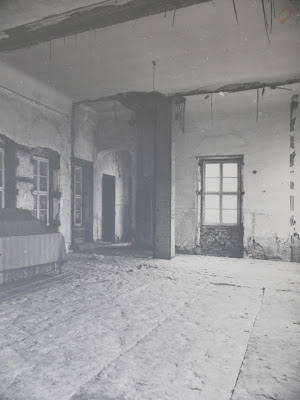 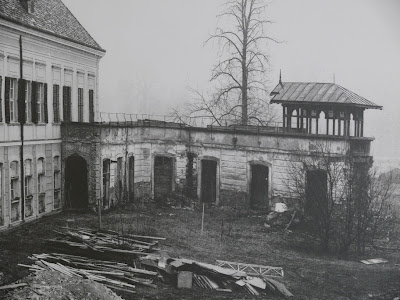 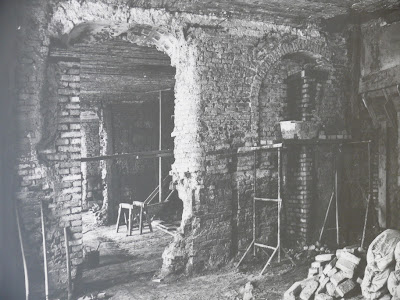 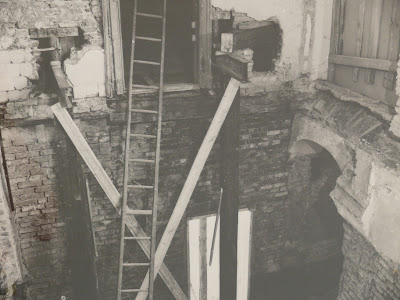 It had been used as a stables and campground for soldiers, apparently, and I don't know, but it looks like it had been burned and perhaps bombed as well.  Anyhow, the restoration is rather more impressive once you see those photos!  Here's the interior courtyard of the schloss, looking across to the small tower called the Belvedere, which we'll get to in a bit: 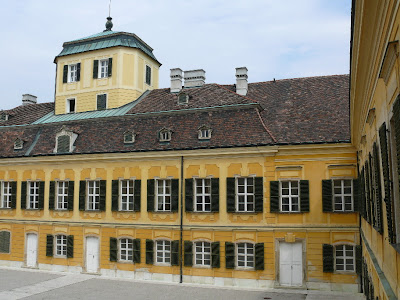 Here's a room in the director's office area: 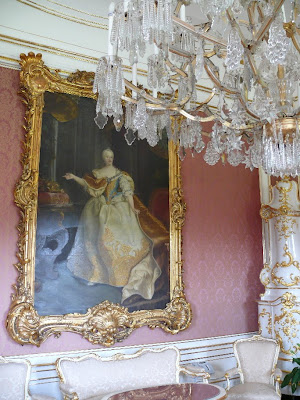 Sorry my camera doesn't have a wider wide angle, it's not very good for these interior shots!  If you look back to those black and white photos, you'll see one that shows a sort of gazebo at the end of a wall.  This has also been restored.  It's the breakfast nook where the empress used to dine, and it's outside the director's office.  It's a pretty spot, with views across an orchard and past flower beds to other parts of the schloss: 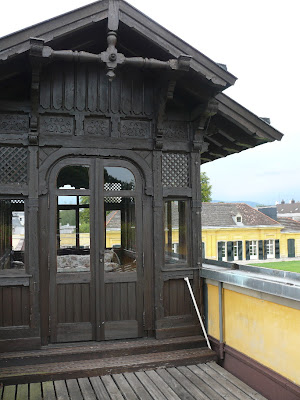 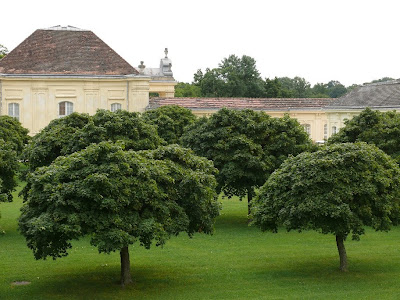 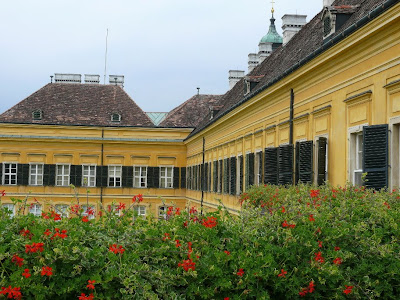 Through another room with nice gilded details in the plasterwork: 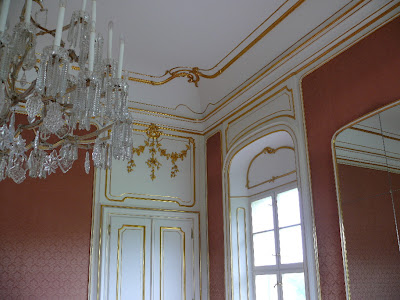 And now up into the Belvedere, the small tower on one side of the schloss.  This is offices now, and the desks and whiteboards rather spoil the effect, but it used to be the children's nursery: 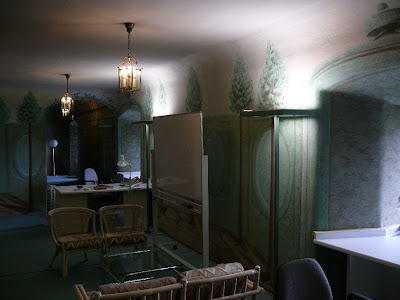 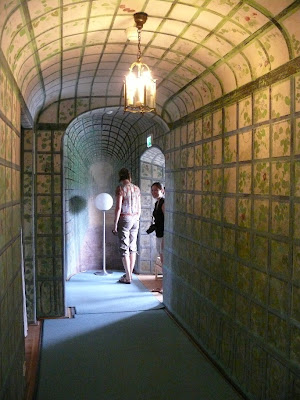 It's all painted to produce the illusion of being outdoors in a garden; scant consolation on the cold rainy days, I imagine, but they tried.  :->  Upstairs, in the top floor of the Belvedere, the paintings are a bit more convincing and ornate: 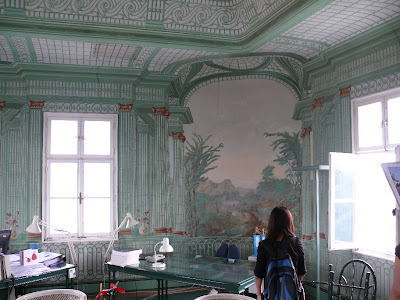 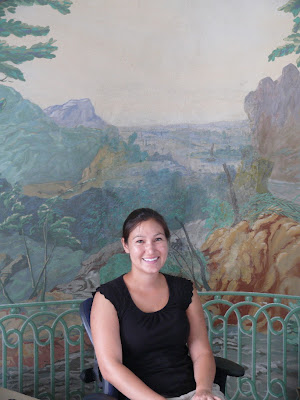 I rather like that last photo; of course nothing in it is real except Regina and the office chair!

That concludes your schloss tour.  It has been ages since I've posted; that's because I was madly busy finishing my research project before the end of the YSSP.  That's another story, for another post, however.  The YSSP is now done (sob!), but this blog will limp along until I've actually left Austria, which isn't until September 13th.  At the moment I'm still in Vienna, but that won't be true much longer.  Stay tuned for more adventures of... Nerd-Boy in Austria!
Posted by Ben Haller at 10:33 AM